According to our customers. Xgode is the best and easiest to use way to build and push mobile apps made in FileMaker to the users. So how can we make the best tool even better? We have been listening to our customers and improving Xgode based on their feedback. Now version 2.0, faster, with more controls and better support for the App Store, has been deployed and is ready for you to try out! 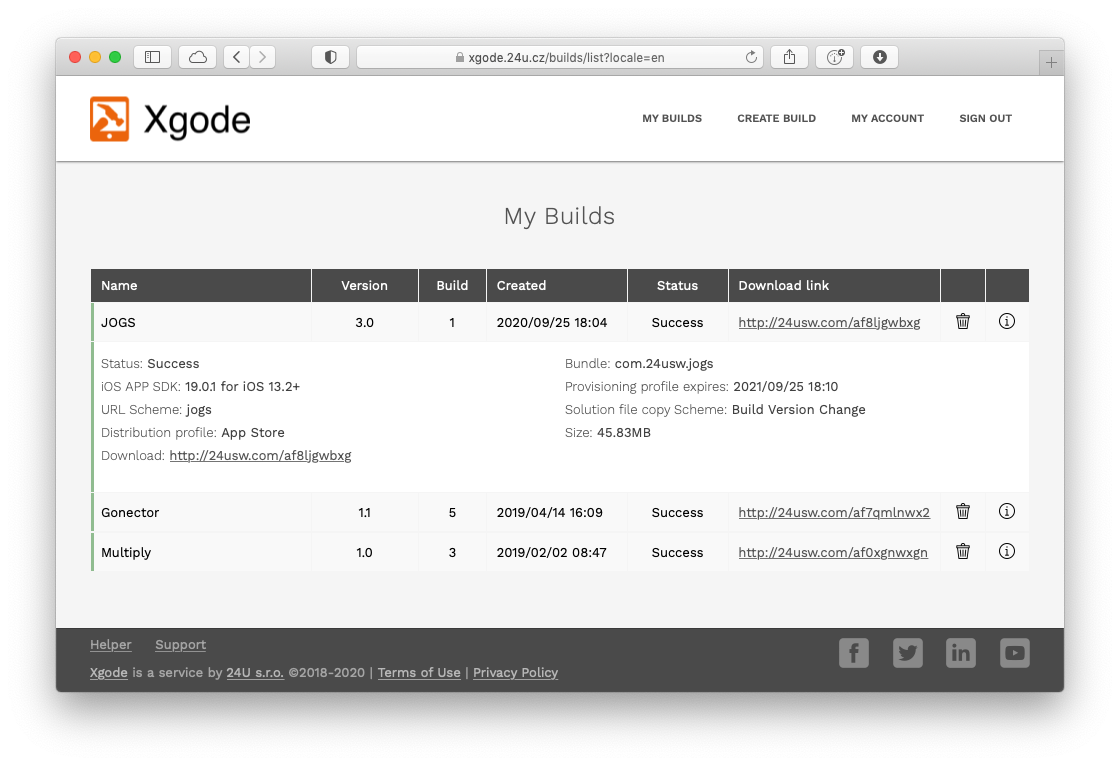 To be honest, the things which are possible with the new Xgode have always been possible. You just had to reach out to our great support team. Check what our Xgode customers from Italy have to say about Xgode and our support (turn on the subtitles if you don't speak Italian):

Our customers asking us for our help helped us to learn what you all might need, so we built most of that into the new version of Xgode, so that you can achieve the desired results faster and with less reliance on our support.

We identified the bottleneck of both the building process and app installation process and optimized both processes to let you deliver your app even faster.

To speed up the building process, we improved our upload engine but also re-organized the Xgode user interface so that the longest taking uploads are started earlier in the process and continue in background while you’re filling in the app information and configuration. 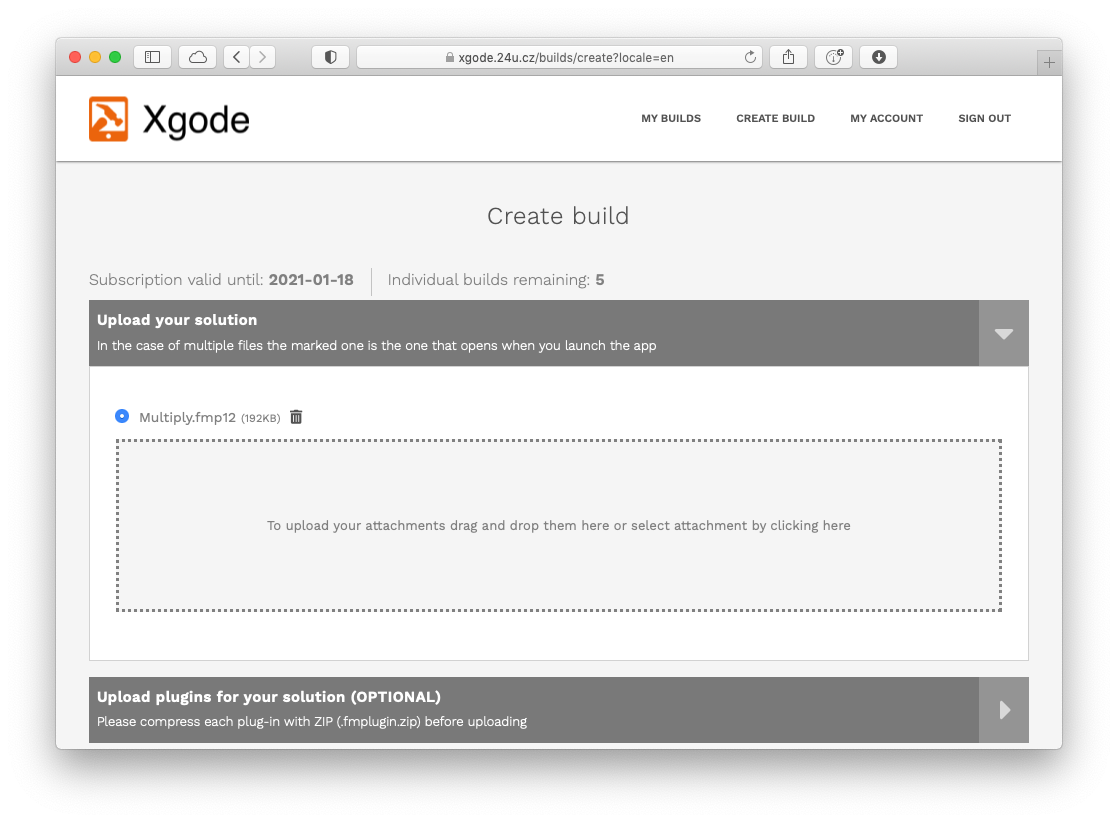 To make your installations faster, we also moved the storage of final builds closer to you, utilizing the fast Amazon S3 infrastructure.

Everyone makes a mistake from time to time. To make it easier for your to spot and fix those which make your builds fail, we identified the most common build failure reasons, and added detailed explanation to the build details view.

It is convenient to let Xgode host your app builds for easier in-house distribution. But what if the installation link leaks to wrong hands? For those of you who want to make sure their app can be only installed by authorized people, Xgode now lets you protect every build with a unique username and password.

We discovered that one of the most common reasons for re-building an app is either the app icon not appearing as expected, or unclear expectation of how launch image and obscure icon are used. So we added a drag & drop interface with live preview of each of these three images. 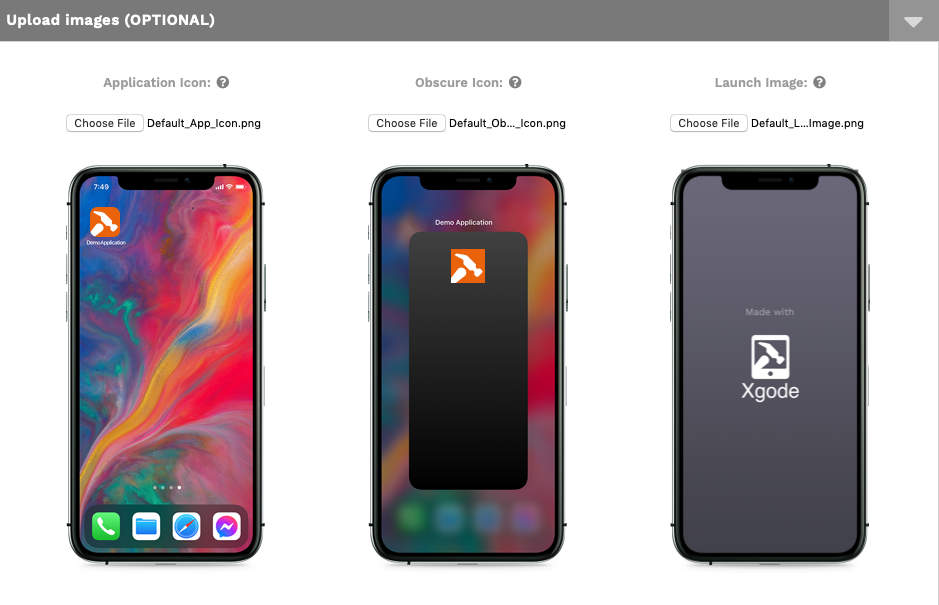 Not every app is intended for every possible device or orientation. In FileMaker Go you have no control over this but with custom-built app you can specify which of the four orientations you want to allow. So we added this possibility to Xgode as well. We also added the possibility to specify whether your app is designed for both iPhone nad iPad, or only one of these device types. This is especially useful if you want to distribute your app through the App Store and don’t want to have to provide layouts and screenshots for both device types.

Apple takes user’s privacy quite seriously. Therefore access to any iOS and iPadOS feature that can let your app breach the user’s privacy, requires the user’s explicit permission. So we added the option to specify which privacy features your app needs to access. You can also customize the message presented to the user as an explanation why your app is requesting such access.

Last but not least, actually the most extended new feature of Xgode 2.0 lets you enable a lot of optional iOS features which are disabled by default. Having those features disabled has two reasons - to minimize every app’s energy consumption, and to make it easier for Apple to review apps submitted for the App Store.

If a feature is completely disabled, Apple’s review team does not have to check if your app potentially misuses it. Actually, using that feature can be detected automatically and your app is then rejected even before getting to the review team.

Most of these optional features are not even supported by the FileMaker engine as it is, but you can get access to them by using plug-ins. For example, to integrate MFI-certified hardware devices supported by our Gonector plug-in, you have to explicitly enable this feature and also list the device profiles your app wants to communicate with… 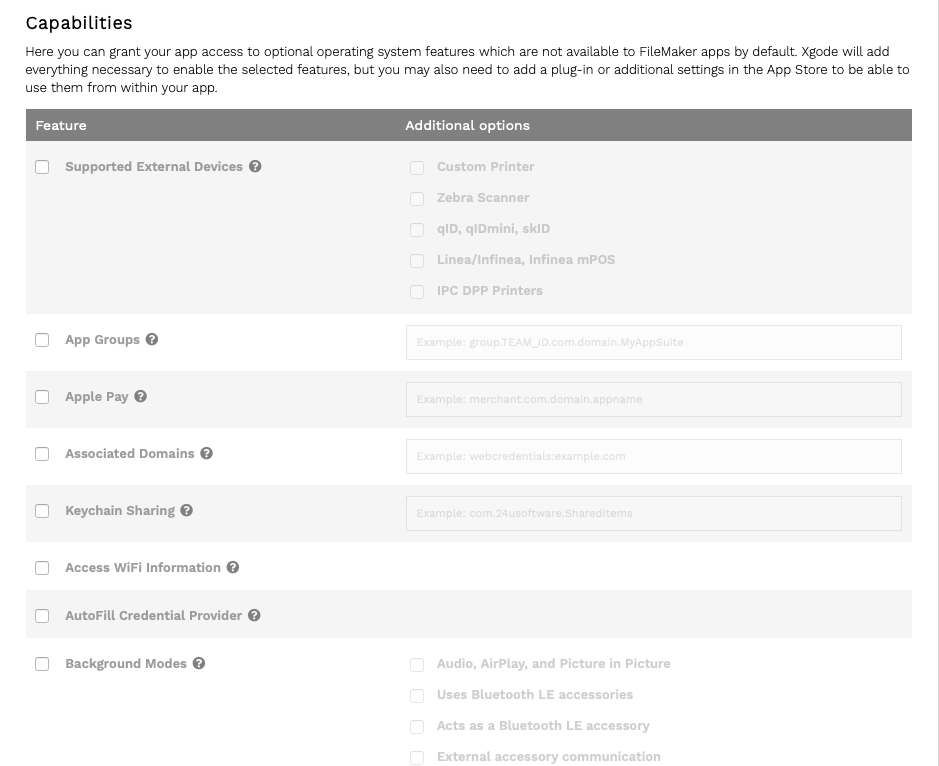 There are a few other minor improvements in the new version, so don’t hesitate to try it out and enjoy the new experience.